Difference between revisions of "Project 1 * AND Publishing"

⟶  see: AND Publishing, London AND is a collaborative publishing activity, co-founded in 2010 at Byam Shaw School of Art in North London. Without an official mandate, but supported by colleagues and occasional university research funding[1] (micro-budget books) AND operated as a kind of indy university press.

Two aspects were important to AND's early practice: to institute a critical approach to publishing at the art school, that supported works of students, staff, and alumni in an equitable manner confounding the defined hierarchies and roles at the art school (student, alumni, teacher, professor, etc.) [pick me up] Publishing was understood as an experimental artistic and pedagogical tool. ⟶  see chapter: Reflection: Queering the authority of the printed book

⟶  see interview: UND statt ODER, die Anatomie von UND Secondly, lots of energy went into experimenting with the immediacy of emerging models of print-on-demand publishing that allowed for small print runs down to one copy and did not require upfront funding.[2] Digital print opened a multitude of possibilities to experiment with the conceptual and social boundaries of the printed book – which I discuss in more detail in the co-authored essay "The Impermanent Book" and in the chapter "Reflection theorization. 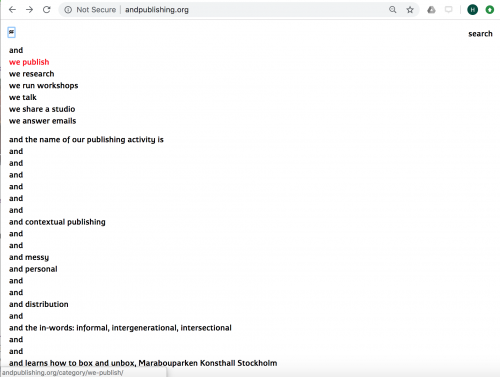 Through different constellations of members [3] and having loosened the ties with the art school AND's practice shifted towards a more political practice that is invested in feminist radical pedagogy, builds informal support structures, shares a studio, provides resources and advice as well as access to skills, means of production and distribution. AND re-distributes budgets, commissions work, and (re-)publishes material which is difficult to find. AND works with individuals, collectives, and institutions including publishing classes, workshops, talks and education programs. Likewise, the varying members of AND are part of a diverse network of critical, feminist, de-colonial publishing activities and campaigns.[4]

The long list of the conjunction "and" on our website indicates AND's accumulative approach. Less concerned with developing a focused brand or a unified face[5] "AND's practice is contingent, accumulative and messy. This 10-year long accumulative approach can by definition not be reduced to a research question, instead, this very summarily description of AND serves here as a starting point, an overarching framework and context for the four artistic projects submitted for the Ph.D.

AND evening school: Working in the Edges, The Showroom, London 2013-14 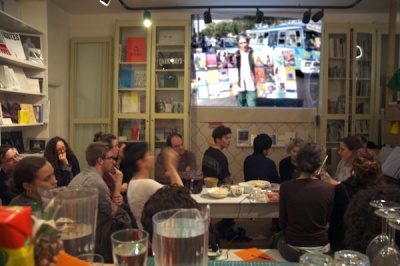 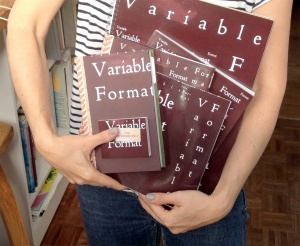