AND is a collaborative publishing activity, co-founded in 2010 at Byam Shaw School of Art in North London by Lynn Harris and Eva Weinmayr and joined by Rosalie Schweiker in 2015. Without an official mandate, but supported by colleagues and occasional university research funding [1] AND operated as a kind of indy university press exploring the immediacy and new social, creative and economic possibilities of the at the time emerging print-on-demand technologies.[2] AND's purpose in the context of the academic institution was to conceive publishing as an artistic as well as a pedagogical tool of experimentation and articulation and to institute a critical approach to publishing at the art school that worked equally with students, staff, and alumni confounding the prevailing hierarchies and roles (student, alumni, teacher, professor, etc.).

After several years working at Byam Shaw Shaw School of Art, which was eventually merged with Central Saint Martins - AND was deemed "a free-floating anomaly" that was positively acknowledged as generative but had not been given a place in the newly merged and streamlined institution – AND moved into a collectively-financed studio and worked independently with institutions, collectives and individuals on a broad range of publishing projects. AND set up an open distribution platform for POD publications (AND Public, 2011) as well as publishing evening classes (The Showroom, 2012-13), education programs at art institutions, gave talks, lectures and workshops at various universities and art spaces.[3] ⟶  See distribution platform: AND Public on Wayback machine Over time and through the multiplicity of members[4] that, themselves, form part of a diverse network of critical, feminist, de-colonial publishing activities and campaigns[5], AND's practice accumulated a broad range of social, political and artistic investments including feminist practice, radical pedagogy, informal support structures, studio collective, providing resources, advice and skills, means of production and distribution, as well as re-distributing budgets, commissioning work, and (re-), publishing material which is difficult to find.

⟶  see published interview: "UND statt ODER, die Anatomie von UND" (AND instead of or, the anatomy of AND)

This contingent and accumulative approach, indicated by the long list of "ands" on the website does not aim to produce one position, a focused brand or unified face[6] is grounded in multiplicity. This specific dynamic of different constellations, collaborations, concerns, and tactics that are defined by the conjunction "and" (instead of "or"), deliberately evades a clearcut framing. It is a practice that keeps creating spaces, both spatial (the studio) and metaphorically (friendships, alliances, collaborations) where the quality of being and working together is not (or to a lesser extent) impaired by allocated roles, questions of authorship, or cultural capital. (It is however affected by precarity, a topic that I will unpack in the chapter analysis.) Based on the internal accumulative logic of AND, I will not attempt to pin it down further for the purpose of this Ph.D. submission but point to its function as the overarching framework and context for the four practice projects that I describe, reflect on and analyze in the following chapters. 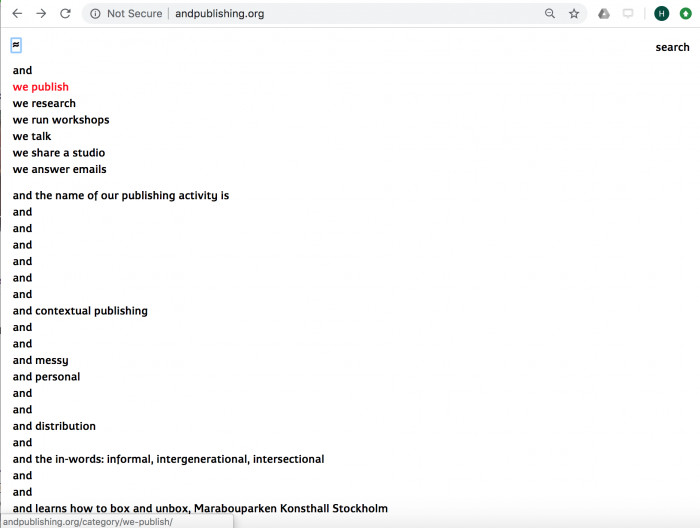