The Library of Inclusions and Omissions (LIO) is a practice-based experiment into critical knowledge infrastructures. Through an open call for contribution, it builds a reference library that is curated by the community that is using it. So far roughly 100 contributions are on the shelf. The library gathers feminist, intersectional, postcolonial materials which are not, or only sparsely available in institutional collections or databases, too flimsy in format or otherwise not validated by publishing houses or institutions such as libraries. Can such a curatorial concept help to give voice to undiscovered, suppressed or otherwise not acknowledged material? Can this turn a library from a repository of knowledge into a space of social and intellectual encounter? And in which way can such a project help to build knowledge infrastructures that counter the normativity of the modern, colonial project?
→ Reflection, theorisation of projects#Perspectives and Framing under the disguise of neutrality
→ Summary of projects and submitted material#One publishes to find comrades
→ Summary of projects and submitted material#Library Underground - A Reading List For A Coming Comunity

In order to receive contributions from a range of different cultural backgrounds and communities, the open call was published in Swedish, English and Arabic and distributed in community centres, libraries, universities, art spaces in and around Gothenburg (including suburbs such as Angered). 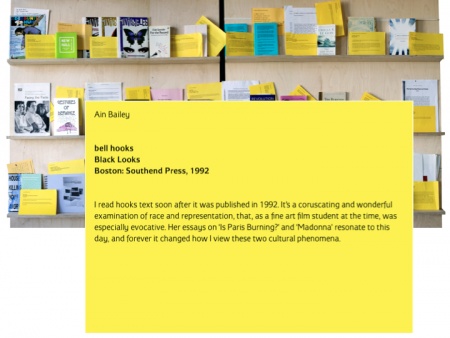 The LIO asks contributors for a short written rationale, why this book is important to them and why they want to share it with others. Through this the emphasis shifts from trying to frame the actual content of the book in an arguably objective manner towards describing the readers' personal making of meaning and the publications agency for the reader. The short statements are printed on the LIO´s index cards thus serving as an entry point and framing device for the library users. This subjective catalogue approach can be understood as an experiment to connect people through their readings, discoveries, desires, struggles and hopes. This experiment challenges the concept of neutrality and universality in standard institutional cataloguing systems that are bound to using a 'controlled vocabulary' and classification system. >see chapter xx "categorisation"

Reading Room at "Meaning Making Meaning", A-venue Gothenburg
16 March – 2 April 2016
Convened by Gabo Camnitzer, "Meaning Making Meaning" was a three-part project consisting of an exhibition, a series of workshops and the Library of Inclusions and Ommissions Reading Room. 37 artists and educators responded to two questions: “How do you bring a classroom to life as if it were a work of art?” (Felix Guattari, Chaosmosis) and its reformulation: “How do you bring a work of art to life as if it were a classroom?” [1]The invitation to participate in "Meaning Making Meaning" triggered the library project. It provided a constructive context, because so many participants and visitors were invested in the relationship of critical knowledge practices and the arts, and actively contributed by adding many and varied materials to the library.

Reading Room at "The Research Show", A-venue Gothenburg
6 – 23 April 2016
Convened by Cora Hillebrand, Ram Krishna Ranjan, and Mick Wilson'The Research Show' was an informal work in progress exhibition by doctoral researchers based in the Faculty of Fine, Applied and Performing arts, at the University of Gothenburg. [2] Because "The Research Show" followed directly on the "Meaning Making Meaning" project it was a continuation of the library reading room in the same exhibition space.

Reading Room at "Utopia of Access", Pavilion for Artistic Research, 57th Venice Biennale
11 May - 2 July 2017
Curated by Jan Kaila (Uniarts Helsinki) and Henk Slager (Utrecht University) "Utopia of Access" invited ten researchers from different Nordic doctoral programs to articulate new modes of artistic thinking on the notion of access. My approach to installing a reading room in Venice was led by questions such as: Can a collectively owned resource be exhibited at an international art show such as the Venice Biennale? What are the underlying politics of "exhibiting" a resource that is anchored in a local community and collectively owned, in the context of an international Art Biennale? Would the practicalities of such an exhibition be productive: Would visitors come back and add relevant materials to the library? I decided to use this occasion "to tell" about the project rather than moving the whole resource to Venice. I presented a 1:1 scale photographic representation of the books on the shelves, printed on large posters that were accompanied by a printed pamphlet. In this pamphlet named "Dear Hannah", I discuss the fine line when exhibiting turns into an act of artistic co-option. →Summary of projects and submitted material#Dear Hannah 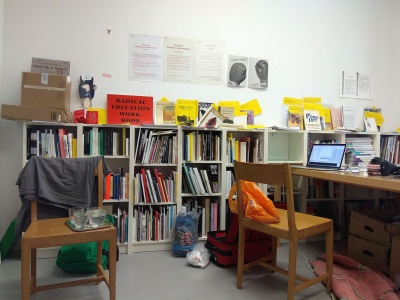 Reading Room at Guestroom Research Residency – "Boxing and Unboxing", Marabouparken Konsthall Stockholm
21 April – 26 August 2018
Invited by MarabouparkenKonsthall curator Jenny Richards, selected parts of the Library of Inclusions and Omissions were installed in AND Publishing's "Unboxing Room" at MarabouParken Konsthall. In this room, we displayed a range of cardboard boxes that we shipped from London to Stockholm, containing materials we were working on at the time. Visitors were invited to 'unbox' this archive in progress.[4] This "Unboxing Room", initially designated to be in the main galleries, unfolded eventually in one of Marabouparken Konsthall's office/archive rooms in the administration wing. This change of plan was initiated by the realisation that the formal no-daylight gallery space did not allow for the kind of engagement we hoped for. The new room on the corridor next to the staff kitchen was a more friendly and conducive environment for this intended process of discovery. Visitors were guided by Konsthall staff to the admin office wing – "backstage" so to say, making the invisible processes of administration and organisation and finances at the admin offices visible to visitors. →Boxing and Unboxing

Retrieved from "http://wiki.evaweinmayr.com/index.php?title=Project_2_*_Library_of_Inclusions_and_Omissions&oldid=8747"
Facts about "Project 2 * Library of Inclusions and Omissions"
RDF feed