Project 2 * Library of Inclusions and Omissions

⟶  see chapter: 05*Reflection, theorization: The Library of Omissions and Inclusions – radical publishing practices require radical librarianship The Library of Inclusions and Omissions (LIO) is one of the four projects submitted for this Ph.D. This page's function is to give a quick overview of the project with short factual descriptions of its elements and practical steps. For a detailed reflection and theorization, please see chapter 05*Reflection and theorization of projects.

The LIO is a practice-based experiment in critical knowledge infrastructures. Through an open call for contribution, it builds a reference library that is curated by the community that is using it. So far, roughly 100 contributions are on the shelf. The library gathers feminist, intersectional, postcolonial materials which are not, or only sparsely available in institutional collections or databases, too flimsy in format or otherwise not validated by publishing houses or institutions such as libraries. I wanted to explore whether such a curatorial concept can help to give voice to undiscovered, suppressed, or otherwise not acknowledged material. How can a library turn from being a repository of knowledge into a space of social and intellectual encounters? And could such a project build a community or connect different communities? In short, could such a project help to build collective knowledge infrastructures that in some ways are able to counter the normativity of how knowledge is created and shared in institutional libraries?

In the hope to receive contributions from a range of cultural backgrounds and communities, the open call was published in Swedish, English, and Arabic and distributed in community centers, libraries, universities, art spaces in and around Gothenburg (including suburbs such as Angered). 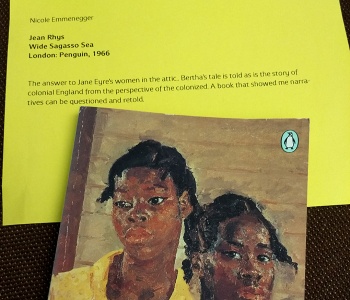 ⟶  see: Reflection, theorization of projects: Perspectives and Framing under the disguise of neutrality ⟶  see: LIO Index Card Catalogue The LIO asks contributors for a short written rationale, why this book is important to them, and why they want to share it with others. Through this task, the emphasis shifts from trying to frame the actual content of the book in an arguably objective manner towards describing the readers' meaning-making and the publication's agency for the reader. The short statements are printed on yellow index cards that accompany the book and serves as an entry point and framing device for the library users. This experimental approach to cataloging is an attempt to connect people through their readings, discoveries, desires, struggles, and hopes and to challenge the concept of neutrality and universality in standard institutional cataloging systems that I discuss in more detail in the chapter 05*Reflection and theorization.