Now, that I am coming towards the end of this whole text, the kappa, that reflects the ramifications, effect and implicit contradictions and dilemmas my practice projects deal with, I do need to start thinking about the colophon. That this is a hot and difficult task, you may have guessed by now.

And you probably have experienced the stress and difficulty at the end of a long and collaborative effort of making a book, when you sit down having to draft the colophon page.

The colophon is a page at the end or at the beginning of a printed book that gives contextual information of the book's production. These traditionally list the date and place of publication, the name(s) of the author(s), printer(s) and publisher(s). Sometimes other roles in the production of the book are being named as well, the proofreader, editor, designer, the type font or its designer, the paper or its maker are being named.

The colophon is a page of acknowledgements. And the question is who, and in which role, do I acknowledge in the production of this kappa. Where do I draw the line? Are all the contributors and collaborators in the practice projects to be included, since they "co-authored" the projects? How could the roles be described, that in a feminist intersectional practice are crucial to be made visible and acknowledged and how on earth could they even be distinguished from each other?

⟶  see book chapter: Confronting Authorship, Constructing Practices – How copyright destroys collective practice You can see, I am dealing with a contradiction here. In 'Confronting Authorship - Constructing Practices' I am pointing out exactly this blockage that occurs, when transversal, collective practice is being confronted by the demand to attribute roles and authorship retrospectively.

But listen. I am trying to come to terms with this dilemma. Here, and this is a massive contradiction, I want and need to demonstrate that knowledge practice is intrinsically collective. Therefore I have the urge to do the work and acknowledge the collective effort by exactly doing what seems to be problematic, to name the contributors and their roles.

Emily Roysdon's colophon in the book 'Uncounted' that accompanies her show at Secession in Vienna lists a range of people involved in the art institution, including the board of directors and the cleaners by name. I say 'a range' and not 'all' the people working at the institution, because I cannot know whether she really got everybody or she made a selection. This is an interesting and implicit dilemma, if you start naming people, who always will miss some. What is, however, striking with this move, is that she acknowledges that it is not her individual work, that makes the exhibition, the book, but the institution as a body, acknowledging the curators, administrators, managers and cleaners on the same page.

Okay, I hear you saying, but what has the cleaner after all from being named in Emily Roysdon's colophon? Does his or her life become easier? Does the pay rise? Is the treatment better? Do they even give a shit about being named on this printed page in an artist's publication? Or are their personalities just reduced to being 'the cleaner at the Secession' instead of acknowledging other strands of life, such as potential political organising against the precarity of the job, zero-hour contracts, exploitative working conditions, etc? Or does this person even not want to define itself by their day job and would rather like to be named as a mum/dad or a Harry Potter specialist, a football player, a passionate cook or marathon runner?

Emily Roysdon's decision to list them might be seen as a gesture of guilt, as you might say, just as well as an act of feminist practice, as it values the invisible work of cleaning equally to the director's achievement of running the institution.

A similar tension applies to my attempts to use the wiki's function to insert properties and values in each project page, the so-called 'Facts about' box at the bottom of the Piracy Project for example. What I tried here - in the spirit of acknowledging the ongoing collaboration and discourse that the Piracy Project had instigated or sought. [See Piracy Project 'facts about'.] So you might now say, well this is a clever move because it's a show-off, you name all the amazing interlocutors we had during these years, curators who approached us, writers who wrote for us or allowed to publish their essays. Here you just feed into the culture of evaluation and cultural capital that you critique. My response would be, yes, that is one danger, but I also map that such an artistic project is not created by an individual, it is a huge, complicated and collaborative effort. And I need to find a way to frame this in order to account for it. This is why I am trying to come up with different role descriptors, avoiding the usual suspects... but I see it might not work out after all because your critique is right - to a certain extent.

I would also like to show you the colophons of the publications produced by Constant, a non-profit, trans*feminist artist-run organisation based in Brussels working in the fields of art, media and technology. [1] Constant organises each year transdisciplinary work sessions. These work sessions are collaborative, transdisciplinary moments in which knowledge gets exchanged. Many of these sessions look into the conditions and politics of infrastructures and technologies we are using or are entangled in. The work session 'Are you being served' (2013), for example, was organised to explore the politics and ethics of hosting technologies and to not take server-client relationships for granted. That involved questioning the common understanding of terminologies such as 'server', 'service' and 'hosting'.[2] The publication that was produced based on the research and exchanges has an interesting way to credit the contributions. First of all, a long list of names of the 104 participants in the work session is published. There are no roles specified. This list sits next to a page, that lists the 'publisher' (1), the 'editors' of the publication (7), 'food and hosting' (3), 'pictures' (2), 'support' (listing the funders), 'sources' lists the url where to download the pdf. 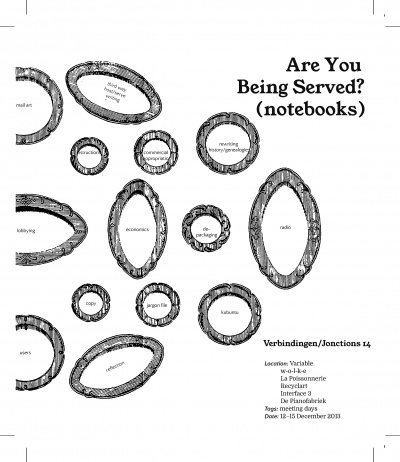 Manetta and Cristina, the coding experts, who coded the wiki wrote a template for "page properties" for the colophon, where I can develop customised and relevant descriptors.

It has to do with visibility

I did some experiments. The wikis function of introducing properties to the project pages allows me to state for each project who did what and in which role.

I tried to come up with descriptors that capture specifically the

If I credited the person who made coffee every morning

It is about visibility.

Retrieved from "http://wiki.evaweinmayr.com/index.php?title=The_Colophon&oldid=4754"
Category:
Facts about "The Colophon"
RDF feed